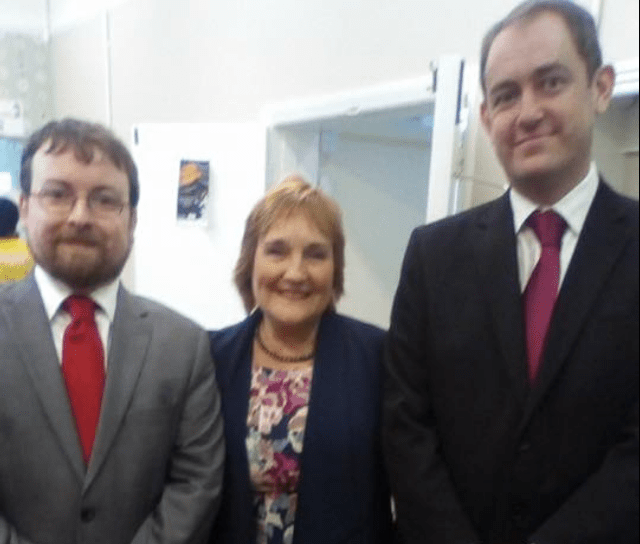 Simon Jeal, our newly selected candidate for next year’s local council elections, blogs about why he wants to stand and some of the local issues he wants to tackle, if elected.

Simon is pictured here (far left) with Penge and Cator’s other candidates (and current Councillors) Kathy Bance and Kevin Brooks.

“I’m excited and really proud to have been selected to stand as a Labour candidate to represent Penge and Cator next May. I’ve lived around Penge since I moved to London to work and love the strong, diverse community we have- I’ll will work hard to support local residents and fight against the hardship caused by the Conservatives in both Westminster and Bromley council.

I joined the Labour party the day after the election in 2015 because, after reading all the coverage over who was to blame for Labour losing the vote, I went out for lunch with my ‘work buddy. She talked about an app she’d used to tell her which party’s policies she agreed with most to decide how to vote (she matched the Lib dems most, but couldn’t possibly vote for them, so went for the Tories.)

After I spent twenty minutes explaining what Labour’s policies actually were, she decided that actually she should have voted Labour instead. I realised that if I’d had the same conversation a day earlier, that was one vote I could have changed- so if I’d had ten conversations like that- ten votes, and so on. So the only person I should blame for not having a Labour government was myself, for doing nothing except voting and relying on other people to do the hard work. Back at my desk ten minutes later I signed up as a member.

Ever since I joined the party, I’ve been active in supporting the running of the branch, the constituency party and out campaigning for Labour victories in the elections and the Labour Remain campaign in the EU referendum.

As branch chair, I’ve worked hard to ensure that all members feel welcome at meetings, have the opportunity to raise local causes they believe we should be supporting and discuss the priorities they believe are important for Labour to be focused on locally and nationally. This past year has been pretty busy with Theresa May’s snap election. I did everything I could to make sure we ran a strong and active campaign in Penge for the general election, and we’ll be campaigning just as hard next May. I took on a large part of the work coordinating the campaign between the branch and the CLP, as well as organising for Ellie Reeves (our then candidate and now nep MP) to attend a public meeting in Penge to answer questions from local residents, giving them the opportunity to understand her experience and views on the issue that mattered to them. I was also out talking to Penge residents about the election week after week, right up until the day itself, and I’ll work just as hard candidate to keep Labour candidates as Penge and Cator’s representatives on the council.

I’ve seen the hard work Kathy, Kevin and Peter continue to put in as councillors to help residents and since I’ve worked with them helping organise the Penge Festival and as part of Penge Partners, the incredible amount of work they do to help organise local events like the festival, support vulnerable residents and keep community resources like Melvin Hall running. In addition to attending council meetings and supporting the Bromley Labour group, Penge councillors need to be active in the community, working hard to support residents and participating in local groups and community events- like the festival, Penge forum, Penge Day and supporting residents’ groups.

Over the past few years, the inadequate ratings Ofsted have given for Bromley’s youth offending service, adult education services and children’s services have made clear the damage their ideology has done- the stupidity of cutting service budgets and deliberately under-spending, only to have to spend far more putting money back when their cuts cause services to fail, or to be withdrawn because the council won’t properly fund them, despite having hundreds of millions in ‘investments’. While I won’t personally feel the impact of the loss of specialist services like Carers Bromley, many vulnerable and less fortunate people will and we can be pretty sure that, once they’ve safely got the election out of the way, further cuts will be coming. A few years ago I needed the support Beckenham Mind provides when I was going through a tough time, so I know how much of a difference local services like these make. I will passionately fight against further cuts in services, that would prevent others needing support like I did from being able to get it in the future.

After the general election success and the council’s repeated recent failings, I think it is crystal clear that Labour offers a better vision of a future, for Penge, across Bromley and nationwide. We will fight against the short-sighted cuts Bromley council make at the expense of residents while keeping their millions tucked away. We can implement policies focused on protecting local services, giving greater control to local people, focused on serving the community rather than running the council as a business.”

me! View all posts by gaillem